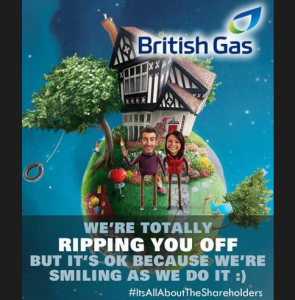 After British Gas announced increases of 10.4 per cent for electricity and 8.4 per cent for gas yesterday, perhaps it should have let the news sink in a little before hosting a Q&A session on Twitter! So despite the fact that thousands of people are struggling to pay their energy bills already, the new increases result in a £120 annual increase. No wonder people are angry.

Consumers took to Twitter to vent their frustration at Mr Bert Pijls, British Gas customer services director, and the result is a mixture of despairing, sarcastic and outright disgusted tweets. The director reiterated the company’s stance on the matter, which states that the reasons the hikes are unavoidable is because of wholesale prices increases, essential improvements to pipes and wires and the cost of government programmes.

There were over 11,000 tweets sent using #AskBG by 3pm, peaking at midday with about 160 sent per minute. What began as a well-intentioned move to let customers get information from the horse’s mouth blew up in British Gas’s face, and shortly after the Q&A session twitter users mirthfully pointed out that BG was advertising for a new social media manager (50 to 60k salary per year no less).

Here’s a selection of some of the funniest and most memorable tweets:

#AskBG My office has a window where the sun comes in and makes the side of my head really hot. How much do I owe you?

.@BritishGas #AskBG What is the best temperature to thaw an elderly relative at and what seasoning would you use with one?

.@BritishGas have you found a way to channel angry customer feedback into electricity? #askBG

Here is a Giraffe. Are you having one with your price rises? #AskBG pic.twitter.com/RtLiTNKicO